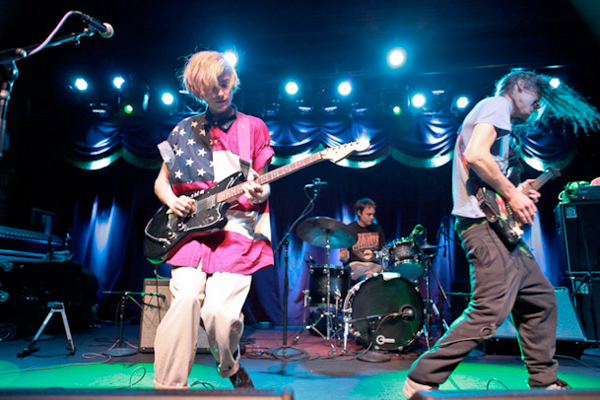 New York is one of the greatest cities on earth.  This is not a controversial statement by any means.  It is loved for its energy, character, and charm.  We marvel at its history, and drool over the restaurant scene.  The museums and galleries represent the gold standard in North America, and if you’ve ever wondered why you bought that pair of funky glasses, or decided to sport a skinny tie and tight trousers for your night out last Thursday, there’s probably a west village designer or two that deserves a thank you.  The place oozes cool.

When it comes to the music scene however, the coolness factor is not distributed equally within the five boroughs.  Over the past 20 years, Manhattan has turned into a playground for the privileged; it’s a place that is completely unaffordable for the artist community.  Although the island has produced a great number of alternative bands,  since the post punk revival scene, which was defined by acts such as The White Stripes and The Strokes, most have had at least one eye on commercial success. And while you can’t deny the impressive body of work of some of these more mainstream artists, the seeds of something quite different have been germinating on the other side of the bridge.

Brooklyn has created a community of artists and musicians where the boundaries between art and music are blurred – a self-supporting community of happy outsiders who simply want to make the music they want to make.  Bands such as The Dirty Projectors and TV on the Radio blazed a trail shortly after the turn of the century, helping to create one of the most vibrant scenes in indie music.

A couple of new acts have emerged that are both in keeping with this trend.  Formed late last year, DIIV began as the solo project of Zachary Cole Smith, guitar player for the band Beach Fossils.  The original name Dive was both homage to a Nirvana tune with the same name, and an acknowledgement that all five band members have a ‘water’ astrological sign.  Ok so we won’t judge the lads for probably enjoying a wee toke now and again; the music is outstanding.  DIIV’s debut album Oshin was released late last month to considerable fanfare from the discerning indie crowd.  It’s a very groovy record, defined by exquisitely layered guitar work and memorable instrumental moments.  However, Oshin is truly a unique piece of music for what it doesn’t do, which is to reveal itself too easily.  It only provides hints of direction, never tells you how to feel, and leaves each listener to enjoy their own ride.

Brooklyn duo Exitmusic has a bohemian back-story that is the envy of the east village.  Aleksa Palladino, the daughter of a New York Opera singer, met Devon Church in the smoking car of a train while backpacking across Canada when they were teenagers.  After their initial contact, Church wrote her letters, waxed poetic about his feelings, and eventually moved to New York and in with her. The pair was married in 2008, moved to Los Angeles to further Palladino’s acting career, returned to New York in 2009 once she landed a role in the HBO hit Boardwalk Empire, and started an indie rock band together. Produced by Church at home, the debut album Passage is chalk full of beautiful songs.  They’re evocative, emotionally resonant, and drip with heavy texture.  Palladino is a versatile singer, and clearly a formidable artistic talent.

I’m never one to shy away from a trip to NYC, and truth be told, I’ve spent countless days in Manhattan happily satisfying four fifths of the human sensory experience.  If you’re looking to engage your fifth sense with something uniquely New York, head over to the other side of the east river.  You’ll be glad you did.