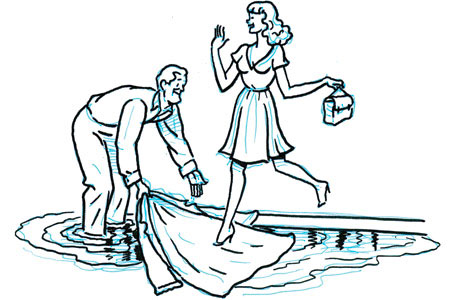 Hello!  And welcome to my new column. Thank you for taking the time to read. In each issue of Eligible Magazine I am going to try my best and shed some light on the always daunting, sometimes elusive world of dating. What to do? What not to do? What to wear? Say? Smell like? Act like?  All those little questions that come (or don’t come) to mind when a single male or female thinks about dating.

I thought we would start off with a simple list of sorts:  Do’s and Don’t for men in the dating world.

1. SDC.  Shower, Deodorant, Cologne.  My brother told me a story once about a guy in Taiwan that he met that would literally meet girls CONSTANTLY, simply because he matched his body wash, his cologne and his deodorant.  Some magical trifecta of heavenly aroma that made girls’ knees week.  Steve called it a load of crap…and sure enough, later that night at the club this guy was SWARMED with women.  Till this day the mysterious God of scents, has not revealed the combination.

No girl wants to go on a first date at 8pm, and see prince charming role up around 8:17.  Wrong message.  And even more importantly…don’t be pulling up at 7:30pm with flowers and a puppy.  It seems minute, but it’s important.  Be on time. 5 minutes before and/or no later than 5 minutes after.

Car Doors, the door to the restaurant, any door ANYWHERE…that you come across… open it up for her.  It always saddens me to think that this old fashion gesture is lost.  Don’t let it be lost on you.

1.  Don’t FIGHT to pay the bill.  Certainly offer, but it’s 2013! Women are powerful, successful creatures and often times being over insistent on paying the bill can be insulting to a woman.  Swallow some pride, go halfzies if she wants.

3. If the date goes well DON’T walk away without a kiss.  I promise it will be what she thinks about before she falls asleep, and it will be what she tells her friends about the next day.  DON’T go to bed with her.  You will cheapen your relationship before it even starts. But be a man, and get that kiss.

Much more to come!

Thanks again for the read.

Good luck in your search to find love.

I promise it’s worth it.