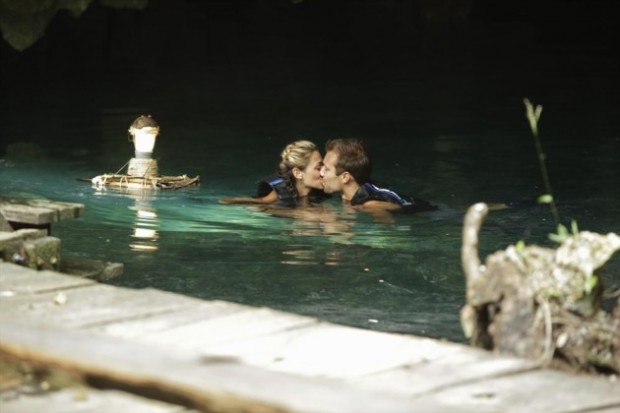 Bachelor in Paradise: Leave it to Jesus

By Jacqueline Baker @jacquelinebaker · On September 1, 2014

Welcome back to another exciting week of Bachelor in Paradise ladies and gents. On this week’s episode, contestants test their spiritual side, avoiding temptation and putting faith in God Almighty. Buckle up everyone; Jesus is taking this wheel for a spin.

First up we have Michelle and Cody. Michelle is a little overwhelmed by Cody’s overly exuberant personality when it comes to affection. The previous night he told her that he loved her, and that was enough to make Michelle wonder if she could ever catch up to his level. But, after some honest and open conversation, Michelle realized what an amazing guy Cody is, and that she is so lucky and so blessed to have a man like him in her life. “I’m going to tear you up,” she says to Cody. Be careful Michelle, the Incredible Hulk might just tear you up first… with all his love.

Next Marcus and Lacy “face their fears together,” and take their relationship down a dark cave. Lacy has a bit of trouble trying to describe to us the big pointy things hanging from the ceiling. Ready Lacy? Repeat after me: s-t-a-l-a-g-m-i-t-e. Oh well.

I’d give her an “A” for effort. While Lacy probably isn’t the best resource for an English tutorial, she admits she is falling in love with Marcus, and that’s all that really matters in all this.

Sarah and Rob seem to have a good thing going, but Jesus puts a test to Sarah’s strength. Introducing Brooks Forester, Sarah’s secret crush and real reason for coming to Paradise. Uh-oh. Will Sarah cave into Brooks’ good looks, charm, and witty humor? Stay tuned as we watch her drool over this newbie.

After Brooks ends up taking Jackie on a date because Rob told Brooks Sarah is off limits (the man knows how to claim territory), Sarah realizes that Rob really is the man for her, and Brooks has only showed her that she really is falling in love with Rob. Way to go Sarah. Temptation really can be conquered if you aren’t asked on a date (and we all know you would have gone on it). Inspirational, if you ask me.

Finally we have Christy and Jesse. Poor sweet Christy finally realizes that Jesse isn’t the glamorous gentleman she’s tricked into believing. “I’m gunna’ leave that in God’s hands,” Christy says, as she discovers Jesse is a big-time womanizer. Well Christy, thank your praying starts, because a Saint is on your way. Tacos, oops I mean Tasos Hernandez, shows up on the beach and takes Christy on a date. With his adorable smile and godlike glowing skin, who could say no to such a miracle?

Jesse decides it’s best to just leave Paradise because he “got what he came for.” But that doesn’t stop Christy and her lady posy from confronting him at his limo forcing him to confess his sins and pay for the damage he has done. Now Jesse, don’t you remember what Luke tells us in 6:31 of the Bible? “Do to others as you would have them do to you.” It’s not nice to talk about people like behind their backs. That will be 3 Hail Mary’s for you, Jesse.

Jackie realizes she likes Zack more than Brooks. That’s pretty much it, so we also say goodbye to Brooks.