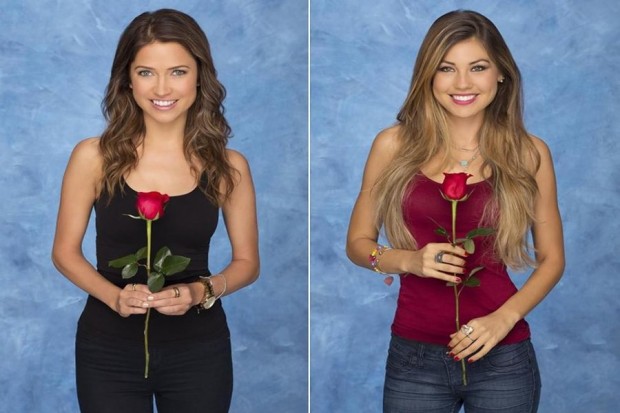 The Bachelorette: Britt vs. Kaitlyn

Welcome back Bachelor Nation! I don’t know about you, but I’ve never been so excited about a Bachelor/ette season before. The producers decided that they were to going to have 2 Bachelorettes due to an equal amount of hype for both Britt Nilsson and Kaitlyn Bristowe. This left everyone with questions. Will there be 2 bachelorettes the entire season? Does one get eliminated the first night? Do the guys who choose the eliminated bachelorette also get kicked off? Well, all of our important questions were answered on the two-night premiere.

Now before I get into the juicy details of the episode, I will have you know that going into it I was undeniably #TeamKaitlyn. Britt didn’t rub me the right way last season with all of her crying, and how friendly she was all the time (even to Kelsey). Kaitlyn was funny and knew how to have a good time. Sometimes I wondered how ready she was to settle down, because of her raunchy humour and fire cracker personality. By the end of the first episode, I truly felt different about Britt. She impressed me with how confident and genuine she was. I still love Kaitlyn, but I decided it wouldn’t be so bad to see Britt stick around.

My favourite part of every season are the first impressions straight out of the limo. Something about that situation being so awkward and nerve wracking for them, while I’m sitting on my living room couch with a glass of wine and no one to impress makes me very content. This season is extra special because, we got to see which girl the men walked up to first revealing who he was most interested in (for the most part).

Some of the highlights from the first impressions and my initial reactions are as follows:

Ben H. sponsored a child for BOTH him and Britt. My reaction: Really sweet? Really forward? That’s like skipping at least 10 steps in their relationship.

Jared has a “Love Man” alter ego. My reaction: Love Man? He scores zero for creativity with the name.

At this point, I’d like to shout out to the brilliant editors of The Bachelorette, for manipulating our thoughts as to who the underdog is. They truly are masters at making me second guess everything ever. Britt? Kaitlyn? BRITT?! KAITLYN?!

Then comes along JJ. JJ takes after Kaitlyn with a vulgar but clever pick up line. “I would love to puck you” he said as he hands over a hockey puck. He then proceeds to tell Britt that if he knew there would be two bachelorettes, he would’ve pucked her too. My reaction: Poor Britt.

Then the famous Shawn B is introduced. He is known for being a mix of Ryan Gosling and Calvin Harris. I really admired him for switching it up and going with a good ol’ group hug, instead of picking one of them first and making the other feel like second pick. He then talked to Britt, leaving her with butterflies and looking like the heart eyes emoji. Directly after, he turns to Kaitlyn and admits that she is the reason he is there RIGHT in front of Britt. My reaction: Ouch? At least he’s cute?

Tony the “Healer” is introduced, with a black eye? I guess healing black eyes isn’t a part of his repertoire. He seemed genuine until he told both the girls the EXACT same thing with both of them being only metres apart. At least he believes in equality!

Now taking a break from the limo entrances, That Drunk Guy finally comes out to play. There’s always one. He continued to flatter the audience with phrases like “I’m all horned up right now”, and “I’d like to take that girl out for a nice steak dinner and never call her again.” Stay tuned for more romance from Ryan M.

Back to the limo entrances, Shawn E (Amateur Sex Coach…AMATEUR???) rolls up in a hot tub car he likes to call the “carpool”. This had everyone laughing except for one person, That Drunk Guy. Ryan graces us all with his presence by shouting insults to Shawn E as he was trying to make a first impression. With extremely threatening phrases such as “That car sucks!” and “You suck dude!” Kaitlyn then says she’ll be giving him the “worst impression rose”.

Last but certainly not least, Chris the dentist arrives in a cupcake. If you haven’t seen this yet, you have to go watch it, because I will not to do it justice. Trust me, it rightfully earned the spot as my favourite first impression ever.

Kaitlyn and Britt enter the mansion to commence the mingling portion of the evening. Kaitlyn, of course, has to drop a knock-knock joke right away, while Britt uses her speech slot to let the guys know that she’s looking for “a best friend”. During a side interview, Britt perfectly sums up their differences. “Kaitlyn’s joke kind of speaks to what’s different about Kaitlyn and I in this journey. Like, this is our chance to walk into the room and say what we’re looking for, not do stand up.”

It’s important to note at this point that every guy has to figure out who they are going to vote for as the next Bachelorette. Some men arrived knowing who they wanted to keep, but ended up changing their mind due to the first impressions. Others keep their heart set on their initial choice. Some men are 50/50, and would be perfectly content with either girl.

So the voting opens, and Tony the Healer is the first to (literally) bolt over to the voting room. “The energy coming from the chest with Britt’s name on it was pulsating.” Reassurance is always nice.

Then ladies and gents, our first man to man conflict arises. Shawn E confronts That Drunk Guy about the remarks he made during his carpool entrance. Ryan doesn’t remember anything of the sort, obviously. He claims he “didn’t do anything, besides being awesome.”

Ryan M then continues to prove he’s there for the right reasons. He calls the girls “a couple hoes” while talking to another guy. He also went for a very chivalrous ass grab on Kaitlyn, who didn’t love the gesture and reacted exactly how I would, “Wow, what a gentleman.”  Then after stripping and jumping into the pool, he enters the voting room. Most men would simply drop the rose in the chest that corresponds to the woman they want to keep. Ryan had a new profound idea and voted by whipping the rose at Britt’s picture. Needless to say, Chris Harrison was quick to remove him from the mansion.

While the socializing and awkward situations continue, there are some very strong connections made. Kaitlyn took a particular liking to Shawn B (America’s favourite, probably). They both reference later that they felt it was love at first sight. Britt made a deep connection with Brady, because of a shared faith.

At this point, both women are having fun and really getting to know the men. They both tell the cameras that they “NEED to be the bachelorette”. The votes are now tallied, and America gets to see who their next Bachelorette is going to be. Just kidding. We get punched in the face with a “To Be Continued”.

Lucky for you, you don’t have to wait. Britt is eliminated, and Kaitlyn is crowned the next Bachelorette. Britt leaves shocked and sad. She says she almost wished she hadn’t met any of the men, because it makes it harder for her to walk away from. When Chris tells Kaitlyn the good news, she’s obviously thrilled. Who wouldn’t be? I for one, as an OG Kaitlyn fan, am super happy about it. She’ll make this season very fun to watch.

Now, with just 1 bachelorette, there’s more mingling to be done. Commendable points go to Jared for being honest with Kaitlyn and telling her that he voted for Britt, but that he wanted to stay and find love with Kaitlyn. “I’m very, very happy you told me that”, Kaitlyn replied.

So, let’s get down to the important questions. Who got the first kiss? Chris the Cupcake. Who got the first impression rose? Shawn B, obviously. Kaitlyn expressed how attracted she was to him, and how much he stood out to her. They then shared a fairly long make-out session. Something tells me that she’s taking after Chris the Farmer, who kissed everybody faster than he could learn all their names.

The very first Rose Ceremony then takes place. No surprises here, except for Brady leaving to pursue his connection with Britt. Stay tuned for updates on that! 7 men in total left that night, leaving us with 18 bachelors.

Now everyone’s favourite part, the dramatic season highlights which reveal the biggest controversies. One that stands out, Kaitlyn admits to sleeping with one of the guys before the Fantasy Suite. Also, Nick from Andi’s season comes back. No. Please, no. Let’s be honest, was anyone a Nick fan besides Andi?