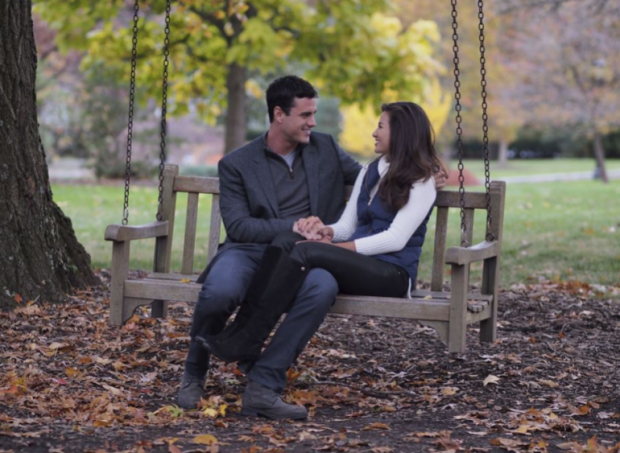 This was the week we’ve all been waiting for: hometown week. The episode opened with Ben brooding into the sea, so we knew from the get-go that this was going to be good. We started in Laguna Beach with Amanda, but this didn’t stay a date for two for long. Ben met her daughters and Amanda made it clear that they’re a package deal. It started out strong, but when shy Charlie refused to shake his hand, we already could see this family dream going up in flames. To Ben’s credit, he did try initiating an adorable sand castle octopus and chasing seagulls, but the awkwardness of first meetings carried the day. Still, Ben claimed it felt “natural” and won Amanda’s seal of approval. Of course, meeting the parents was a different matter. Amanda’s dad interpreted Ben’s reaction to a crying Charlie as a “deer caught in headlights,” while her mom noted the 26-year-old was a bit young to be an instant dad. All understandable. That being said, Ben broke some Bachelor history by sounding genuine as opposed to a line-caster as he assured the potential in-laws that his feelings are real. By bedtime story time, Ben and Amanda both claimed they saw a fairytale ending to this dating game.

Lauren’s date in Portland, Oregon was a clear switchover to relaxation for Ben. The pair visited local food trucks and a romantically lit whiskey library. The one dim spot was Lauren’s nervousness about the big family visit. As we’ve seen in past seasons, unreceptive relatives are a surefire way to send Bachelors running for the door. We could all rest easy though, because this was possibly the nicest, most wholesome family meetup yet–all the way down to meeting toothless family dog Tessa. We can applaud Lauren’s sister for sticking strong to the girl code, because she seriously grilled our guy. When it came time for Ben to explain what made his bond with Lauren so special, he teared up. Soon after, Lauren confirmed to her sleuthing sis and dad that this was the real deal. Dad told her that he worried his “baby Lolo” would be hurt by Ben because of his wide dating pool. Of course, that warning didn’t stop Ben and Amanda from parting with some serious moonlight smooches. Score on genuine chemistry versus hometown visit #1? A knocked out of the park 10.

For date number three, Ben met up with Caila in Hudson, Ohio. Ben said that he felt the most “challenged” by Caila and that this was the “deepest” relationship he has on the show. Sorry, Lauren. A self-proclaimed “rootless” Caila nevertheless showed attachment to her short term hometown. We cheered behind screens when Caila admitted that her past conversations with Ben about her feelings were awkward and confusing. Yes, Caila, they were. Please clear this up. She took the Bachelor to her high school, the first place she viewed as a true home while growing up. The two sat on a significant swinging bench–it was the place she always pictured bringing the “one”–and shared some deep kisses. Later, they designed a toy house at her dad’s factory. This may have been one of the cutest dates ever, as the couple donned hard hats and literally built a home together. At dinner, the family gave Ben a rundown on Filipino food and traditions. Ben dished to Caila’s mom on his admiration for her daughter’s honesty, but also on his fear that she couldn’t love him. Meanwhile, a sobbing Caila told her dad, “this is it.” If only she would tell Ben that.

JoJo’s hometown date in Dallas was disastrous. Two words can mostly explain why: older brothers. The meetup between Bachelors and protective older siblings are rarely smooth. To top it off, there was a ghost of the past haunting the visit. JoJo came home to a note from her inconsistent ex, Chad. A phone call later, JoJo was still reaming out the guy as Ben walked up the porch steps. When she opened the door in tears, Ben dug to get the bottom of it. As soon as JoJo came clean, we really saw Ben’s actual deer in headlights look. But after JoJo assured him the old relationship was over, the deer crossed safely to the other side of the road. Sort of. By dinnertime, Ben was telling JoJo’s parents that he would be willing to leave Denver to make his marriage work. The contestant’s brooding brothers later accused Ben of being a “brainwasher” of women. They pointed out the inconvenient fact that their sister has only been on two dates with Ben. But…group dates! Those count, don’t they?  Meanwhile, JoJo’s mom gave her full blessings while Ben gave a somewhat wishy washy impression of commitment to her dad. After the siblings’ confrontation, we wanted to hug Ben as he asked us, “Am I that evil?”

At the rose ceremony, Ben came into the room with a face full of tears. We could guess why when the last one standing was Amanda. However, a post-rejection chat proved that this guy knows how to part on good terms. By the end of explaining to the confused castoff that he had stronger bonds with the others, she hugged him and saved her tears for the limo. But there was no mistake once the camera was on her alone that Amanda was truly heartbroken. Back at the mansion, Ben told us that he wanted her to know he cared. The rest was lost in beautiful Bachelor tears.
Judging by next week’s previews, it looks like there’s going to be a tug of war between two for Ben’s heart. Be sure to tune in, Bachelor Nation! With the hometowns behind us, there’s only more heartbreak and heart-stopping confessions to come.