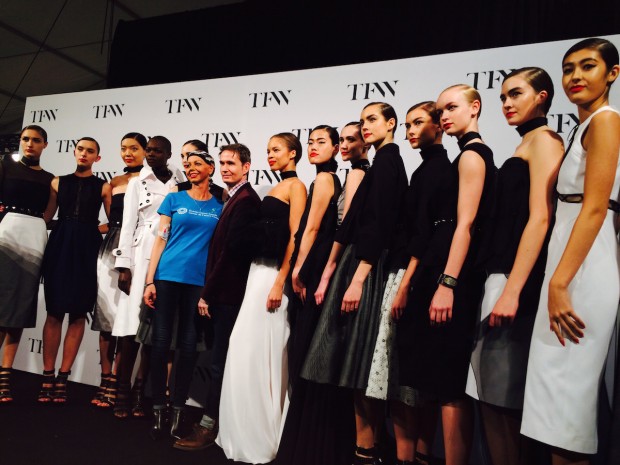 David Dixon’s Fall/Winter 2016 Runway show was as much about purpose as it was design. So much so that even Toronto Mayor John Tory joined the packed house in a standing ovation to celebrate this very personal journey in memory of Dixon’s late sister, Susan.

“The Gene Collection” was designed to illustrate a new way of seeing the everyday fabric of denim. Highlighting the gene analogy, Dixon found a way to demonstrate the resilience of jeans, all while pairing it with some of his sister’s favourite fabrics. Flowing silks, sturdy tulle and splashes of sequins played in broad contrast to a larger message focusing awareness on the issue of Ovarian Cancer, the disease which would eventually take her life. In a video that opened the show, Dixon noted that the collection was meant to help guide women toward knowing their genes, and dedicated it to all sisters, especially his own. To close the show, he was joined by a group of women touch by Ovarian Cancer, as they walked the runway in solidarity. It was a proud moment for the veteran Canadian designer, who I later spoke with after the show.

When asking about his take on the growing changes in the fashion industry, and the movement toward the ‘buy now wear now’ trend, he spoke to the importance of artistic expression:

“This show kind of talks to that whole change in how we’re doing fashion shows, because this collection is all about invoking conversation, invoking awareness, it’s not about ‘ok, is it strapless, is it three quarter length, is it half a sleeve, what colour will it be’, it’s more about creating a conversation with people and women, to make sure that they talk to their doctors, so they get to know their bodies, because Ovarian Cancer is not spoken about often. It’s about creating awareness.”

In wanting to share his personal experience, Dixon is mindful about the business aspect of the industry as well, saying “I don’t plan to take the ‘buy now sell now’ route, I’m not interested in carrying a large amount of inventory and my relationships with the retailers I work with are strong enough that we can see what happens six months down the road and determine whether the ‘buy now sell now’ option is the best to pursue.”

For many designers, reducing the number of shows in order to meet the changing demand of consumers means fewer opportunities to use the runway as a vehicle of creative expression. For Dixon, the tragic loss of his sister was a means for him to reconnect powerfully with an inspired purpose: to design for healthy, strong and confident women, while honouring the memory of his sister in a poignant act of love. The runway show in this case, provided an opportunity to serve a larger audience who might one day wear his designs.