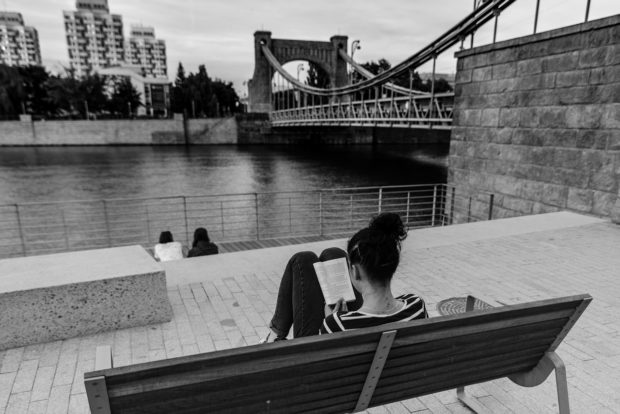 Life is busy. We’re all overbooked, and so it can be challenging to decide which books we should read with our limited leisure time. That’s why we assembled a list of our eight favourite feminist tomes of 2018. We’ve curated a diverse selection of books on a range of feminist topics, from what The Bachelor can teach us about media literacy to the profound importance of the Black Lives Matter Movement.

While they vary in tone and perspective, each book contains special lessons to warm your feminist heart on a cold winter night. So consider picking one up at a library or your local bookstore. Happy reading!

From Twin Peaks to Serial, North American pop culture is obsessed with abused and murdered girls. In this searing new book of essays, writer Alice Bolin unpacks that obsession, examining how women’s bodies are used as props in stories that are actually about men. Bolin’s book deals with both fictional and real-life stories of murdered young women, producing a fulsome work of feminist criticism. After reading Dead Girls, you’ll never think of True Crime or murder mysteries the same way again!

The new memoir by Michelle Obama is everything you dreamed it would be, and more. The beloved lawyer/orator/mother/former First Lady candidly shares her thoughts and feelings on a wealth of experiences. In Becoming, Obama blends both her personal and political life, proving once and for all how the personal is indeed political. Obama discusses her personal struggles with fertility, and the miscarriage she endured before giving birth to daughters Sasha and Malia; however, she also makes time to call out Donald Trump’s racism toward her husband. Ultimately, Becoming is a satisfying read about one of the most interesting – and beloved – women in the world.

It’s no secret plenty of empowered feminists watch (and sometimes hate-watch) ABC’s The Bachelor. Now, intrepid reporter Amy Kaufman takes on the iconic show with a powerful expose. Kaufman did her due diligence with this book, interviewing a laundry list of Bachelor stars, including fan favourites Nick Viall and Ashley Iaconetti. Kaufman goes into detail about how the show enforces traditional gender roles regarding courtship, and the ways in which The Bachelor’s producers manipulate participants (and footage) to create a reality show that’s anything but real. Think of this work of nonfiction as a crash course in feminist media literacy.

Few decisions loom larger in women’s lives than whether or not to have children. Society socializes women to see motherhood as inevitable, but should it be? Acclaimed author Heti uses her deft prose to explore the liminal state between motherhood and a child-free life, that space where a young woman debates if and when to become a parent. The book’s thoughtful narrator will make you reconsider everything from the politics of motherhood to the nature of free will. Motherhood is a rich work of literature that will keep you thinking long after you’ve finished…

When They Call You a Terrorist: A Black Lives Matter Memoir, Patrisse Khan-Cullors and asha bandele

Patrisse Khan-Cullors grew up in an impoverished part of Los Angeles, where she experienced the systemic discrimination Black Americans experience at the hands of law enforcement, and within the broader justice system. In 2013, when Trayvon Martin’s killer went free, Patrisse’s outrage spurred her to action: she went on to cofound Black Lives Matter with Alicia Garza and Opal Tometi. Together, these women founded a social media hashtag that bore a movement. They demanded accountability from the authorities and politicians who often ignore the injustices faced by people of colour. And yet, for this work, these three activists were called terrorists by some critics.

Ultimately, When They Call You a Terrorist is Patrisse Khan-Cullors and asha bandele’s account of what it means to live as a person of colour. This work of nonfiction provides readers with a powerful call to action against racism. It is equal parts educational and beautiful.

As the saying goes, one death is a tragedy but a million deaths are a statistic. In Liem’s beautiful book, a speaker tries to memorialize those disenfranchised victims of tragedy and mass murder society too often overlooks.  Heartbreakingly well-written, Liem explores not just the deaths of marginalized peoples, but the marginalized mourners they leave behind. She examines themes of depression, trauma, and what it’s like to live as a queer woman of colour. Ultimately, Obits demonstrates the importance of mourning and being mourned as central to the human experience.

I dare you to find a more delicious read than Ayesha At Last. It’s a modern retelling of Pride and Prejudice set in a Muslim-Canadian community in the Toronto suburb of Scarborough. When teacher Ayesha meets her new neighbour Khalid, he doesn’t exactly feel like a romantic heartthrob. Khalid is rich and handsome, but he’s also a bit too self-righteous for Ayesha’s tastes. But when Khalid and Ayesha are pulled into the planning of a youth conference at their mosque, the twenty-somethings start to wonder if they’ve judged each other prematurely. Filled with humour, shenanigans, and a healthy dose of romance, Ayesha At Least is a true crowd pleaser. Honestly, this is the intersectional yet delightful feminist novel we need right now!

With Heart Berries, memoirist Terese Marie Mailhot literally wrote herself out of trauma. And she did so by writing about her trauma. Hospitalized for a double diagnosis of post-traumatic stress disorder and bipolar II disorder, Mailhot is handed a notebook in hospital. Soon, she begins to document her coming of age on the Seabird Indian Reservation in the Pacific Northwest. There is much to unpack, like the mysterious circumstances under which her abusive but artistically brilliant father was murdered, and Mailhot’s textured relationship with her social worker mother. Ultimately, Heart Berries is as inspirational as it is heartbreaking, a testament to the healing powers of making art.

RELATED: We Sit Down With Bestselling Author Lindsey Kelk