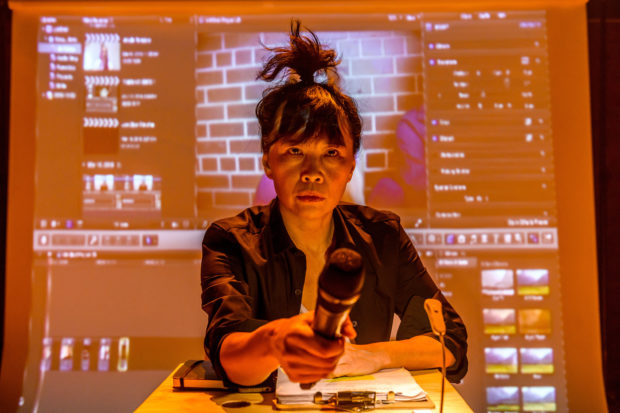 Unsafe is a play that defies categorization, and perhaps that’s the point. Sook-Yin Lee’s newest project is a docu drama, which discusses our society’s evolving ideas of artistic censorship. It’s fast-paced, multi-media, and very entertaining.

The play starts with a video interview Lee conducted with Matthew Jocelyn, Canadian Stage’s former artistic director. Before his departure, Jocelyn commissioned a young, white male playwright to compose a play about Eli Langer, whose art exhibition was raided by Toronto police when his sexually explicit paintings of children were deemed child pornography. The incident occurred twenty-five years ago, and it quickly became lore in the Toronto artistic community. Today, we have no idea what the vast majority of these problematic paintings look like. We aren’t even entirely sure whey they are, and Langer lives is a recluse. While Langer’s story is a dramatic one, it’s not the one Unsafe ends up telling: Ultimately, Jocelyn ended up with a legendary female artist of colour instead of a young white man. Canadian Stage also received a much more expansive production than originally envisioned, one that asks its audience a big question, what makes some art acceptable and other art is taboo? 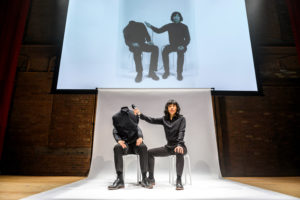 The opening inteview makes it obvious Jocelyn doesn’t like any kind of artistic censorship. He’s obviously on Langer’s side, though it’s not obvious why. Langer’s disturbing paintings were actually panned by Globe and Mail art critic Kate Taylor, who felt the shocking art didn’t have that much to say. However, why Jocelyn’s on Langer’s side, he’s not really on the side of diversity in theatre. He’s a fan of the Elizabethan Tradition in which he was trained, and he seems unsure about why Lee’s so keen to quiz him on diversity. Famous for her rebellious spirit, it  By the end of the play, she’s forgotten about Langer altogether. Instead, the former Much Music VJ’s play turns into the theatrical equivalent of the sort of mind map you made in middle school; she discusses various examples of artistic censorship, as well as call out culture and emotional affairs. Ultimately, the play is no longer just about artistic censorship, but about why certain types of communication are taboo.

The best part of Lee’s play is that it’s not polemical. The journalist/artist uses her well honed journalistic skills to interview a range of experts and community members, from iconoclastic members of the clergy to activists, and millennials who love debating on Twitter. But the play isn’t all interviews and intellectual debates; there’s music, a nude dance number, and even a heartbreaking scene where Lee relives the demise of her twelve year domestic partnership. We even get to hear Lee reminisce about how she rose to fame as a Much Music VJ, or the time the CBC almost blocked her from making Short Bus, an art movie they mistook for pornography. Whether she’s acting or grilling an interview subject, Lee is an enigmatic, compelling performer. When she’s on stage, it’s impossible to keep your eyes off her. In the end, Lee creates a rich tapestry that’s hard to parse, but gives the audience a lot to talk about.

As a millennial who believes in intersectional art, I appreciated that Unsafe doesn’t condemn call-out culture or downplay the importance of diverse representations. Lee’s not a fundamentalist when it comes to freedom of expression. Her text recognizes some communities have more privilege to say and do what they want, and this privilege can directly harm less privileged groups. At points, Lee even endorses the creation of a new artistic climate where the creators who speak to an issue are the ones who experienced it. However, she also points to plenty of places in Canadian history where censorship was used as a tool of cultural oppression, including The Indian Act, which barred First Nations communities from engaging in many traditional rituals. 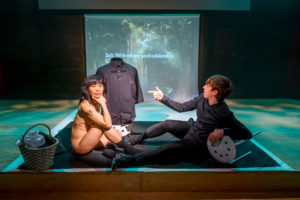 In the end, Lee provides viewers with no easy answers about censorship. Perhaps that’s the brilliance of her frenetic, high-energy production; it makes you feel unsafe, just as the title promises. And that’s because Lee herself never makes safe choices. Her willingness to “go there” with her art makes it obvious why Lee became – and remains – a Canadian icon.

Unsafe will play at the Berkley Street Theatre in Toronto Through March 31st.