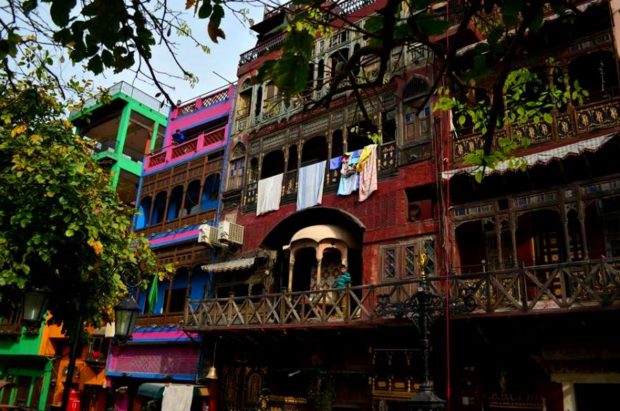 The Walled City Of Lahore And Iqbal Hussain; The Painter Of Lost Souls

The old Walled City of Lahore is infamously known for its history to be one of the world’s well known red-light district area. Many years ago after the dynasty of the Mughal Empire fell; the courtesans of the empire came and settled into the old Walled City presently known as Heera-Mandi. This particular area in Old Lahore has a rich history of culture, art, music, and dance which was passed on from generation to generation of courtesans. In the present day the old Walled City of Lahore has become a tourist attraction where the artistically crafted ancient homes and artifacts have been preserved for tourists to see and through that learn of old Lahore’s history. The dominant attraction of old Lahore is Food Street and its famous restaurant called Cuckoo’s Den owned by Iqbal Hussain, the painter of lost souls.

On my very first trip to Lahore in the year 2013, I visited Cuckoo’s Den with no knowledge of the history of the restaurant. However, as the menu was brought to me, so was a brochure. The brochure had details of the owner of the restaurant, Iqbal Hussain an internationally famous Pakistani artist. As I read a brief paragraph about the artist my hunger vanished, Iqbal Hussain was the illegitimate son of a courtesan, a dancing girl and the very restaurant I was sitting at was his old home, which was renovated to become a historical site as a tourist attraction.

Cuckoo’s Den is not merely a tourist attraction for its delicacies, but it is also a manifestation of the life of Iqbal Hussain, a son of a dancing girl who’s childhood and most of his teenage years were spent on the shady streets of Heera-Mandi; and how his journey from the streets to respectable fame led him to break through societal barriers. At the time of Iqbal’s birth, it was barely a celebration. The red-light district community he was born into was a community where the birth of a girl was celebrated and given more importance. The birth of a girl intended a new breadwinner for the family. Despite this, Iqbal was loved by his family and claims to share a strong bond with them. Iqbal vividly remembers his childhood; ‘young gangster’ days where he sported knives and street bets were a source of daily entertainment. With the persistent insisting of his family, Iqbal was enrolled into the Cathedral School and proved to be an intelligent student. At school Iqbal was academically soaring, however, due to his family background, he was a social outcast at school.

The frustrations Iqbal faced at his red-light district home resulted in him skipping classes at school to play marbles and picking fights with other students. Iqbal was eventually expelled from the Cathedral School for his misbehavior, vandalizing the school walls with graffiti and not attending compulsory church services. Later on, Iqbal was further expelled from two other schools on the shallow basis of his family background, which made the teachers ‘uncomfortable’. There were many times when Iqbal wanted to discontinue his studies and permanently adopt the street life. However, the women in his family were adamant for Iqbal to gain a full education.

Iqbal was well aware his life was not ordinary, especially when he saw the lives of other boys outside his own community. Iqbal would spend his day babysitting his sister’s illegitimate daughter as both his sister and mother entertained clients in their home. He was brought up in a house where the stains of chewed beetle leaf marked the walls, the paint peeled off the walls, other than tattered floor cushions no other furniture was in his house. Despite such surroundings, Iqbal called this house him home, the most comfortable place he’d come to know. Iqbal believed that he should give back to his community and help the people of the red-light district area with the knowledge he gained from his school days. With his acquired English skills, Iqbal handled formal applications, forms and letters for the people of his neighborhood. He developed a very protective stance towards his people.

As Iqbal transited from his childhood years to his adolescent youth, he channelized his rage through sports and became a well-repudiated wrestler in an amateur boxing association. However, the dominant title Iqbal had within his community was of a ‘kalakaar’, an artist. Iqbal’s friends would ask him to sketch them, and Bollywood heroines together, side by side! The young dancing girls in his community would ask Iqbal to sketch them in a way to make them look beautiful, asking him to add a beauty mark or to make them seem thinner. As Iqbal sketched these dancing girls he became an individual who these dancing girls confided in and shared their traumatic stories. Iqbal’s sketches and paintings came to life as he expressed his emotions through his artwork when he heard stories of the dancing girls.

Iqbal’s life came at a crossroads which marked the turning point in his life when a friend confided to Iqbal about a girl, the friend had fallen in love with. Being aware of Iqbal’s exceeding artistic talents the friend requested Iqbal to become his ticket into the campus where his beloved studied. On his friend’s pleading request Iqbal applied to the prestigious Pakistani Arts University, National College of Arts (NCA). With fate on his side, Iqbal was accepted into NCA based on his pure talents, it was then when Iqbal realized his undying passion for art. As a young enraged adult, who was a product of his environment, Iqbal discovered the best possible way to channelize his anger. Iqbal Hussain threw open the closed doors and shuttered windows of Heera Mandi, and dedicated his life to give an insight into the world of the soulless dancing girls and women he was brought up with through his artwork. Iqbal Hussain was supposedly destined to the street life; however, he was not a victim to his anger when opportunities came his way. He took charge of his life and used his opportunities to build a better life for himself and his family. Iqbal Hussain today is a well-repudiated artist internationally, and despite his financial stability he chose to remain in the same home where he grew up. Iqbal decided to renovate the entire area of his home and make it a place where people could come and have a glimpse of the red-light district area which had been demolished recently.

What struck me personally about Iqbal’s artwork was that his paintings of the dancing girls were not depicted as goddess-like, portraying immense beauty. Rather, the women in Iqbal’s paintings vividly display the emptiness in the eyes of the dancing girls and their vacant facial expressions. Iqbal’s paintings were frequently criticized because the women he painted were too ‘fat’ or too ordinary looking. I personally believe Iqbal’s masterpieces are a chronological series which capture the reality of the red-light district. ‘Many of Iqbal’s paintings were not permitted to be on display within Pakistan’s museums because of their ‘inappropriate’ theme which went against both religious and cultural values. Iqbal Hussain’s Gallery In The Basement Of Cuckoo’s Den

I would like to raise a question if paintings of a community with dancing girls are not permitted to be exhibited, then why is it permitted in society for such a community to exist?