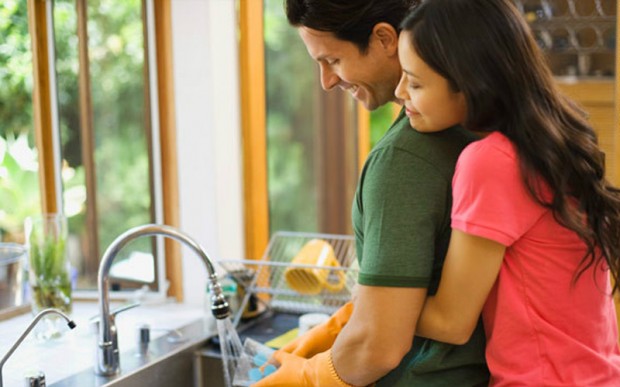 Would You Rather Attract Or Adapt An Equal Partner?

Today half the labor force is women. Also, women under 30 in most cities are making 8 percent more than their male peers, but surveys say that women are still doing most of the childcare and domestic work.

Some traditional couples enjoy these traditional roles where the woman is the householder and does most of the child care (whether she works or not), and the man does the fixing and brings home income.  So, if you fall into that category and this works for you, then great!

But I’m writing this article because as a psychologist who specializes in dating and relationships, many successful single women tell me that if they are going to work so hard at their career, they’d like a mate who will split the domestic and childcare equally, but they don’t know how to create that situation.

When I wrote, When Mars Women Date, a book about how single career women could attract a mate who’d support their dreams too, I interviewed a woman who told me about her cousin’s marriage.  Her cousin fell in love with a handsome man, and would clean his house, cook, and do anything to ‘seal the deal’ while they were dating.  They finally got married, and she learned that he had never done any household chores growing up, and had no desire to learn.  She got him to do a few small things, but in the end, she realized either she had to accept him or leave.  She had created this situation from the start.

I spoke to my friend Connie Carbary, author of the upcoming book, Praying by Heart, Prayer Secrets for Manifesting Prosperity, and she shared her experience of being married for 23 years.  When she was first married, she realized that where chores were concerned, her husband was happy to have her be a slave and she knew that she had to work to adjust her situation if she wanted something different.  She remembered her great-grandmother’s advice that lingerie was like kryptonite for men.  So, she started making lists of chores for her husband, and put small favors at the bottom of the list as a reward for a job well done!  She explained that there was no nagging, no fights and things got done fast.  It became a little game between them.

Some of the rewards were lingerie, others were making his favorite foods, or taking a trip together.  For example, they saved $400 by raking the leaves themselves instead of hiring someone to do it, and were able to put this towards a cruise.  Connie relayed her technique to a friend whose husband was taking forever to finish a home remodel.  She hung up a Victoria’s Secret outfit as a symbol of fun and celebration and it quickly got done.  Connie says that she learned to write concise complete instructions on her list so it was easier for her husband to please her.  When things weren’t done right she took the time to teach him how the chore needed to be done and she would always praise things and say thank you.  They’ve been happily married for 23 years, and she feels this approach has made them both happy.

When I first heard about this approach I had a mixed response.  On one hand I know Connie’s sweetness, intelligence, humor, and power and I could imagine her smiling at her own ingenuity at finding a lasting solution that made both she and her husband happy.  And, after all, isn’t sex fun for both people?

But my ego imagined my feminist readers outraged at the idea that they’d need to offer sex to get a man to do his fair share of the chores, especially when he never rewards her for all that she does!  Maybe this is just the transition stage from a generation before ours, in order to get roles to adapt smoothly and to shift.  Maybe it’s also an opportunity to shift out of two egos locking into a power struggle to create more love.

When Connie heard my reaction, she explained, ” Ultimately, you want to create a happy relationship where everyone wins. Men communicate very differently from women. They feel like sex is their way of communicating love. When we make them feel loved and desired they go out of their way to please us. That is not the only way we communicate our love. We build their spirits up when they do something we like. When they do things we don’t like, we don’t knock them down, but teach them how to love us and please us. Managing a family is somewhat like coaching a team.  The coach of a team has a job to coordinate all of the  positions of the players. He/she has to convey the goals of the team and get them excited and focused on the same goal (group visualization). The approaches for different group dynamics changes, but if you can see it and feel it, it’s easier to achieve it.” Connie’s approach was motivational.

Other married women took an organizational approach by dividing tasks and setting aside time for both spouses to execute them, such as a ‘chore day,’ so they wouldn’t have to nag but could make sure the division of labor was fair and results were on task.

As a dating coach, another way to approach this issue is to choose a like-minded man from the get-go instead of adapting a mate later but some women think that these type of men are slim-pickings!  I dated a great man who ended up being pretty traditional and didn’t want me to work that much, and didn’t want to share chores and childcare equally, and these were reasons it did not work out.  My husband now, and I, discussed things before we married.  He is a wonderful very hand- on dad and he does more than his share of the housework and cooking and we both work.  I never specifically rewarded him for this because it was a joint expectation that we share these things but I do think it’s important to remember to thank each other.

So,  if you’re single and looking for a mate who wants to be an equal partner, discuss it first.  Be honest and open and don’t be afraid to rock the boat.  After all, it’s the same boat you’ll both be living on for the rest of your lives!  Discuss what that journey will entail so that you know how to row together.