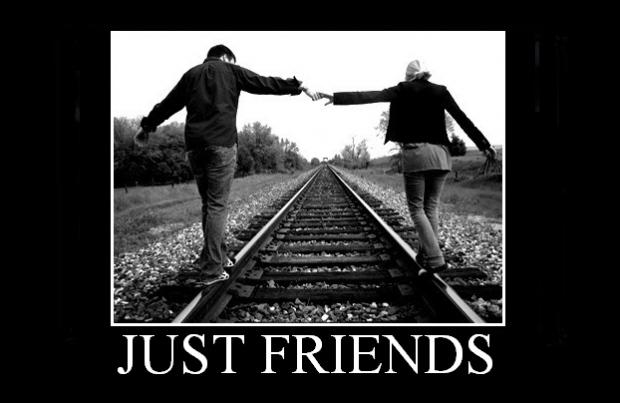 Are We Really “Just Friends”?

I have a dilemma. There is this guy who I recently befriended and we spend a lot of time together. He texts ME everyday, and due to our busy schedules, makes it a point to hang out with me every weekend (just as friends). He waits for me after work and is just an all around gentlemen. After a month of spending time with him, I started developing feelings for him and I told him that. I told him that I really cared for him and that I liked him, but that I couldn’t be in a committed relationship since I am trying to focus on graduating and establishing a life after college. When I asked him how he felt about me, he responded that he sees us just as friends. It was a mature conversation, and I told him I could accept that. However, he still continues to call me everyday and spend time with me. He even made me a 10 minute long video on Youtube for Valentine’s Day. I am SO confused!! He is showing all the signs of interest, without actually being interested (I think). Also, important to know: He is super Christian and has never dated. I am atheist and have had a few flings in my past, but I’ve been honest and told him about all of this. Could that be the problem? Can you explain what is going on in this crazy man’s head (Or maybe I’m crazy)?

Neither of you are crazy. It sounds like he is experimenting with being close to a woman. He has feelings for you and is interested for sure but is saving face because you told him you didn’t want a committed relationship first. He is also likely trying to balance his attraction to you with your conflicting religious beliefs. Given all of this, he is okay with not taking things to the next level (physical or otherwise), he just wants to be romantic. Let him do this. Let him treat you well. Then in a few weeks, check in with him, ask him how he is doing. Say, “you are treating me like I’m your girlfriend even though we are not dating – we need to define what is going on”. Don’t leave the conversation until both of you are clear.