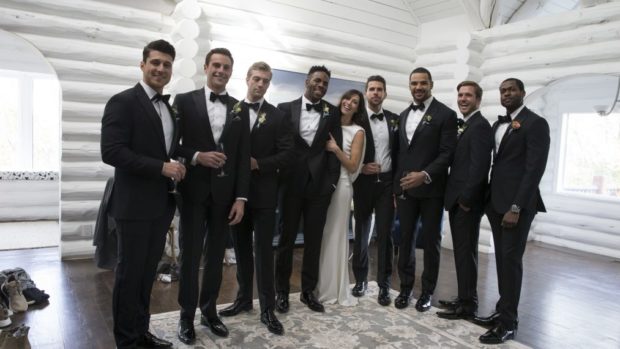 And we’re back! This was perhaps the most eventful second episode in Bachelorette history. There were so many discoveries! As a reality TV recapping professional, this was the type of exceptional episode I live for.

The season’s inaugural date took the form of a group outing for Becca and her man meat. At said expedition, the men were forced to don tuxedos (so they would look like grooms because this show is nothing if not on-the-nose). Once suitably attired, the gents were told to complete a muddy, marriage-themed obstacle course. It was sort of gross, but Lincoln won and was super proud of that accomplishment. And what was Lincoln’s prize, you ask? He won the right to take some fake wedding photos with Becca. Yes, the prize was even more wedding cosplay. Anyway, Lincoln went home to The Mansion and displayed his portrait for all to see. This angered Connor, who interpreted the action as an act of “disrespect.” Things soon got aggro, because of #ToxicMasculinity. Yep, it’s a consummate theme on this show. Lincoln claimed he felt physically threatened by Connor. However, Connor later atoned for his oafish behavior by taking a picture of himself and throwing it in the pool before The Rose Ceremony. This was a symbolic gesture to prove he’d changed, but we’ll see if he sticks to this less aggressive attitude.

You may recall that Blake, the preppy young sales representative from Colorado, was the recipient of the coveted first one-on-one date. At first glance, Blake’s a generically handsome 28 year-old white male. He sort of looks like a handsome youth minister on an American crime procedural where the youth minister turns out to be a serial killer. And, while I would never claim Blake is a serial killer, he did turn out to be creepy.

Blake and Becca’s first date involved smashing television sets. For those who haven’t seen the episode, I swear I am not making this up! The screens were playing Ari’s ill-fated proposal to Becca at the time of their demise. Smashing them supposedly made Becca “feel better,” so I guess all that electronic waste was worth it in the end? I do have to say that beating one’s ex in effigy is an unusual first date activity. But who am I to judge? Back when I was single, I took 82% of my dates for drinks at the same local pub where cheese on toast was one of approximately three things on the menu. After all the destruction was done, Blake and Becca were allowed to have a nice, relaxing dinner. However, neither of them seemed to eat anything. This begs the question: is the food on The Bachelorette unpalatable or something? Or are these contestants exceptionally committed to calorie restriction? I imagine one would work up quite an appetite by smashing an entire Future Shop’s worth of screens. I know I’d be ravenous!

Now, it was at dinner that Blake confessed to his creepiness. Not that he realized that was what he was doing. Creepy guys never realize they’re creepy. That’s probably the locus of their creepiness.

Blake regaled Becca with the story of “the one that got away.” Apparently, Blake’s secret pain is that he had a two-month relationship with a girl who had the audacity to break up with him. Yes, what a betrayal! How dare she abruptly throw in the towel after 10 long weeks? The nerve of her!

It was unsettling enough that Blake felt so betrayed by the end of a brief relationship, but how they broke up was even more problematic. Blake was reading his girlfriend’s text messages on her phone while she was in the shower. That’s when he discovered texts from said ex’s friends, asking her if she’d gotten around to dumping him. So apparently, Blake is a snoop who has no respect for relationship boundaries. Dear Blake: boyfriends are not supposed to check your text messages like they’re the bloody NSA!

Bizarrely, our girl Becca still gave him the prized “Date Rose.” WTF? Not only did Blake get a rose, but Becca was charmed by him. She declared giddily “You want to know me for me.” Um yeah, but she may want to put a password on her phone before taking him to The Fantasy Suite.

The next date was yet another Group Date. I find these so confusing because the men all look the same to me. They really ought to wear name tags for the first few weeks. If any Bachelorette producers are reading this, please answer my prayers!

Anyway, the name tag-less group headed for a school gym where three small children coached them at Dodgeball. The children explained this date was inspired by how “Becca dodged a bullet with Ari.” Man, this show is getting a lot of mileage out of Ari’s unpopularity. I get it, he was a total douchebag, but how is Becca expected to move on if the show constantly reminds her of their horrific breakup? The constant barrage of Ari insults would be triggering for me if I were Becca.

During dodgeball, Leo (the one with the curly manbun), distinguished himself for his athletic prowess. He was undoubtedly his team’s MVP. Leo attributed his admirable performance to a belief that “winning comes from the heart,” and that he was the only man on his team “with a heart.” Hmm, it seems like he might have an ego too…

Despite Leo’s heartfelt efforts – pun intended – his Pink Team did not emerge victorious. Instead, their rivals The Green Team who earned the right to attend dinner with Becca at the Four Seasons. BTW, the production budget for this season is a lot more generous than in years past. There was a time when The Bachelorette would have taken its cast to a Four Points Sheraton instead of a Four Seasons.

At said dinner, Colton decided to confess what’s apparently bothering him since Night One. Calm down! He’s not telling Becca about his virginity…yet. The big reveal was that he and Tia had a “weekend fling” back in January. That begs the question, did Colton audition for the show because he thought Tia was going to be the next Bachelorette? It doesn’t sound like he’s actually there for Becca. Gah, this show is so incestuous!

I am a bit confused about what this “weekend” together entailed. Obviously, there was no sex, so is it really that scandalous? I know Tia and Becca are supposedly friends, but is it really that weird to date a guy with whom your pretend friend once had an extended make out session with? Well, apparently! Becca literally felt sick upon hearing about the news. In fact, she had a bit of a breakdown. The news of Colton’s affair with Tia triggered tons of insecurities for our girl. She broke down in tears, worrying her time as The Bachelorette would once again end with her rejected and alone. However, Becca ultimately collected herself and forgave Colton, because who among us could resist that smile? I can’t wait to see how dramatic things get when he tells her his virginity! We have so much to look forward to now that he’s staying. Praise be!

Of course, The Rose Ceremony was the definitive highlight of Episode Two. I usually find Rose Ceremonies boring AF. As soon as the pre-ceremony cocktail party begins, it’s a struggle not to scroll through Expedia.com travel deals on my phone (BTW, that’s not sponcon, but I would totally be OPEN to doing sponcon in the future. I have my price! Call me, Expedia!).

Anyway, the final thirty minutes of the show was memorable mainly because of male model Jordan. You guys, Jordan is a meme machine! Everything he says is pure comic gold. He’s basically the reason why GIFs were invented. First of all, Jordan decided to attend the cocktail party wearing only his boxers, because, and I quote, “I want her to fall for my personality.” Jordan is basically the human incarnation of dramatic irony!

When Jordan received his alone time with Becca, the model took the opportunity to present himself as more than a pretty face. “My hair is always going to look pretty good, but I like to have fun,” he insisted. You see, Jordan was worried that Becca would think he’s like an IRL “O07,” which he insists he’s not. Don’t worry, Jordan, you’re cute and all but no one is confusing you for Daniel Craig.

While I adore Jordan’s eccentricities, they weren’t much appreciated by the other dudes. One of the other bros accused my boy J. of being “ingenuine,” which is not a word. I can’t remember which one it was, because, as I mentioned before, they all look the same to me at this point. Jordan is one of the few standouts, and that’s because, while vain and silly, he has an honest-to-God personality. I really want to set him up with Corrine from Nick Viall’s season. I think those two are MFEO. I would totally watch a reality show about the two of them, so please take note, ABC! Just imagine the memes!

The episode concluded with Becca giving Alex, Trent, and Rickey the boot. Now that we’ve narrowed the pool down to eighteen gentlemen, maybe I’ll be able to remember some of their names! Only time will tell…

See y’all next week, when we’ll keep “doing the damn thing” the way Becca would want us to.