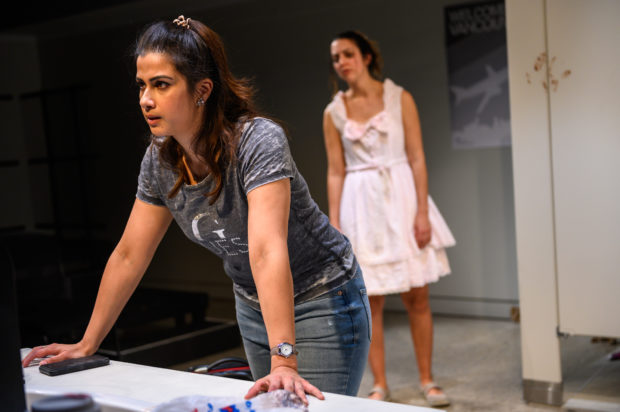 Toronto Theatre: Mules is a Compelling Play about Drug Trafficking

Mules is a must-see theatrical production. Playing at Toronto’s Crow’s Nest Theatre though March 2nd, the entire story takes place inside the bathroom of Vancouver International Airport, but despite the small setting, it packs a big punch.

Written by Beth Graham and Daniela Vlaskalic, the play tells the story of two friends attempting to traffic drugs into the country without getting caught. Cindy is the orchestrator of the operation, a stripper who dreams of leaving an abusive relationship and starting afresh in Toronto. It is she who convinced gentle single mom Chrystal to fly to South America and swallow capsules of cocaine. But as much as the play chronicles the high-stakes world of drug trafficking, it’s also about the high-stakes world of friendship, as the protagonists start to question whether they can truly trust each other.

Directed by Vikki Anderson, the production does not shy away from the gruesome truths of drug smuggling. There are angry dealers to report to, and the unsavoury business of how to get the drugs out of Chrystal’s body. The set ends up smeared in feces, which adds to the realism of an already gritty story. Mules isn’t easy an easy play to watch, but it is a compelling one. You genuinely worry for its stars. Neither Chrystal nor Cindy are particularly happy to be drug traffickers (Chrystal’s never even tried cocaine); however, poverty has pushed them into a business that is both literally and figuratively dirty.

After watching Mules, you won’t leave the theatre feeling happy. It’s not a life-affirming romp like Come From Away; however, it is a provocative play. It shows you both the likable and unlikeable sides of two women whose stories we don’t often see on stage. Mules is a thrilling theatrical experience, and it’s one worth having. Anderson’s play truly has something to say…