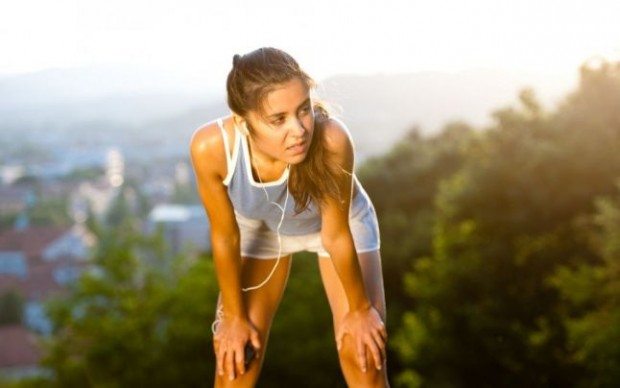 Breaking Up With Running

About a year ago I was seriously debating breaking up with running.

If you know me, you know, that is a big deal.

For the last 12 years, running has been my happy place. Whether I was single or committed, lighter or heavier, moody or tired, running put a smile on my face.

When clients or friends told me that running made them feel awkward or tired, I listened, but I didn’t really “get it.” Since I didn’t remember the frustrations associated with starting to run, I didn’t truly understand how running could be anything other than wonderful.

I didn’t run in February and March of 2014. The weather was terrible and running is hard on the body, so a break seemed like a good idea.

Taking a running hiatus is — in theory — healthy, but my mood suffered. I was noticeably crabbier without running — especially at first. So, I figured that my first run “back” would feel amazing.

On April 1 I laced up my shoes with excitement. Instead of feeling awesome, I just felt awkward. Running was hard in a way I didn’t remember. Then, when I read a blog where the author talks about breaking up with running, I thought, maybe she has a point.

Maybe instead of pushing through the terrible initial phase of running, I should just take up another sport. I decided to push through. I gradually got back into the swing of running, but I have to say, I still don’t feel the unbelievable passion that I once did. I took another month break this February. Starting again on March first was difficult, but not as discouraging as before. I may not love it as much as I used to, but I like it more and more. I don’t think we will breakup, but the possibility still exists.

So what is the point of my confession? I usually have predetermined main “take-aways.” Today, not so much. I guess I really just wanted to share my struggles with everyone and say, you are not alone. Finding the motivation to exercise, to push past any initial awkwardness, to find your “exercise bliss,” is a challenge.

This experience has caused me to believe, now more then ever, that health is a process. Getting into a routine takes time and patience — even for a trainer! You don’t always have to have a clear plan. Of course, specific training goals have their place, but so does the goal to simply “keep on trucking.”

What I mean is, if I had decided to break-up with running, that would have been OK, as long as I didn’t use my struggle with running to justify ditching movement altogether.

One of my favorite Kathleenisms is “make movement ‘non-negotiable’.” Instead of contemplating IF you will move, commit to figuring out HOW you can safely and effectively move.

I am going to keep trying to find my lost love of running, but I am also going to listen to my body and try other activities. I have actually started to love rowing and I think this summer I might join an adult rowing team. Who knows, maybe rowing will become my new fitness love, and that will be OK. As long as I keep moving I will be happy!

Why you should never run without a sports bra. Read More

Kathleen Trotter has been a personal Trainer and pilates equipment specialist for over twelve years. Kathleen is the featured personal trainer in The Globe and Mail’s online ‘Fitness Basic’ series, writes two weekly pieces for the Globe, blogs regularly for The Huffington Post and Healthy Directions magazine and has contributed articles to magazines such as Canadian Running, Today’s Parent and Chatelaine. Kathleen recently completed her Masters at The University of Toronto. Kathleen is currently working to become a registered Holistic Nutritionist from The Canadian School of Natural Nutrition.