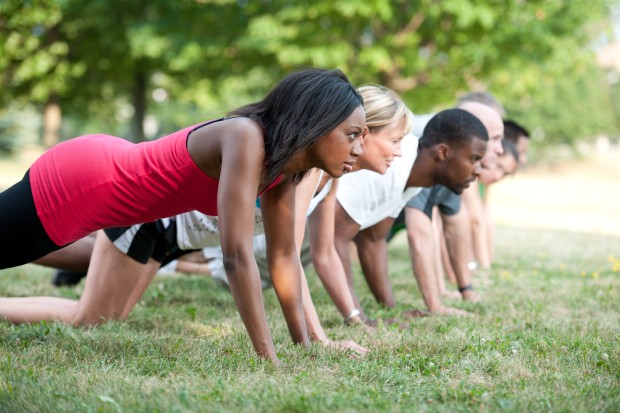 Tapping Into The Mental Benefits Of Exercise

It’s common knowledge that regular physical activity is an essential part of maintaining good physical health, but physical activity also has profound effects on both mental and emotional health. Just as your muscles, lungs and heart benefit studies show that the brain also benefits from the effects of physical activity. Exercise improves mental health by improving cognitive performance and memory, reducing stress, anxiety and depression and improving overall self-esteem. The brain has the ability to adapt and respond to its environment by modifying its neural function, this is referred to as neuroplasticity and it is this mechanism that exercise has been shown to have positive effects on. Exercise increases a protein called brain derived neutrophic factor (BDNF). BDNF aids in creating and maintaining healthy brain cells and having a healthy amount of BDNF can improve decision-making, memory, mental alertness and also helps prevent age-related mental decline. Individuals who participate in regular physical activity have also been shown to have increased brain mass when compared to those that don’t, this is because exercise also helps to stimulate the release of growth factors, reduce insulin resistance, and reduce inflammation which in turn promotes the growth of new blood vessels which increase the nutrient supply to the brain and in turn increases brain size. When stress and anxiety affect the brain it also affects the body, exercise plays on this mind-body connection and is successful at reducing stress, anxiety and even depression by allowing the body to release tension, decrease stress hormones and release mood-enhancing chemicals. A common symptom of anxiety is the inability to release pent up energy, the body was created to move and when it doesn’t it has limited ways to get rid of unused energy. This unused energy creates tension; exercise provides the body with an outlet to release both physical and mental tension thereby decreasing anxiety.

RELATED: Exercise And Its Role In Prevention

When stressed the body produces an increased amount of the stress hormone known as cortisol, this hormone aids in the “fight or flight” response and prepares the body to deal with stressful events however prolonged exposure to increased cortisol levels can have detrimental effects including suppressed immune response, decreased bone density and weight gain. Exercise helps to reverse this stress response, by depleting cortisol levels through low to moderate intensity exercise. Regular physical activity also trains the body to become better at dealing with stress and decreases the overall need for cortisol which in turn allows the body and brain to have a better response to stress.

According to the Canadian Mental Health Association 1 in 5 Canadians suffer from depression, like stress and anxiety, depression also has a mind-body connection that exercise can play into and have positive effects on. Studies have shown that individuals who exercise regularly have lower rates of depression compared to individuals who do not and participation in most forms of physical activity can elevate and stabilize mood, improve sleep, and improve self-esteem and confidence. When we exercise our brain releases natural feel-good chemicals called endorphins, endorphins are related to a positive mood and an overall enhanced sense of well-being which is sometimes referred to as an “exercise high”. High levels of serotonin another chemical released during exercise has also been associated with elevated moods. Exercise also acts as a distraction from constant worries and depressing thoughts, this distraction mechanism is regularly used to help cope and manage depression. Many studies show that exercise compares quite favorably with common standard care approaches to depression and consequently it is being used more frequently by licensed health professionals as an adjunct therapy in the treatment of depression.

Just as we train the rest of our body it is also important to train your brain and tap into the mental benefits provided through exercise.