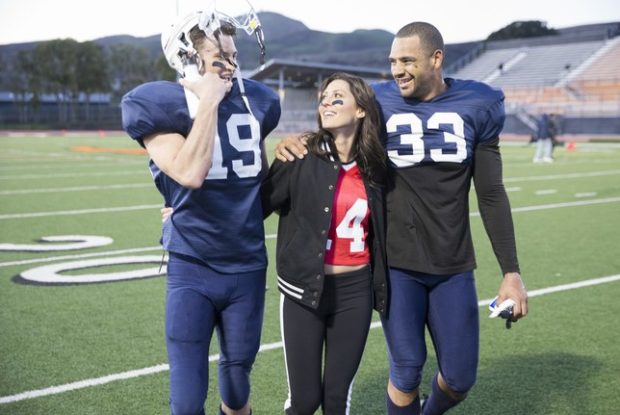 Apparently going on reality TV is a much more perilous experience than we appreciated. This week, not one but two contestants ended up in the emergency room. Plus, part of the show was pre-empted because Trump actually showed up for his meeting with Kim Jong Un in Singapore. I mean, I want to avert nuclear war as much as the next person, but did they HAVE to meet during The Bachelorette? Becca’s search for love is at least as important to America!

Anyway, enough of my griping! Let’s get on with the recap! The first date of the episode was a group outing to a spa, but it was actually just an elaborate excuse to manufacture more drama about Colton’s fleeting affair with Tia. The man meat were enlisted as spa attendants for Becca and some of her “friends” (Read: Fellow contestants with whom she was forced to hang out on Ari’s season). OF COURSE, Tia was among them. The other assembled “friends” of Becca included Kendal, Bekah (AKA Baby Bekah), and Seinne.

When Colton walked in and saw Tia waving in his direction, he declared, “This is my worst nightmare!” Colton, it would seem, is not very imaginative. How sheltered a life has he led that the man cannot fathom anything worse than running into someone he once made out with while on a group date with his traveling man harem? Has he never seen an episode of 48 Hours? The world can get waaaaay worse than this, Cotlon. Listen to Season One of Serial, and then get back to me!

Anyway, the men massaged and pampered the ladies, but who cares about the spa services? Obviously, the highlight of the date was Tia and Becca engaging in some real talk about Colton.

Like any normal woman, Becca took the opportunity to pull Tia aside and grill her on their shared boy toy. Tia admitted she and Colton had indeed spent a weekend together before going their separate ways (they lived in different states, which posed logistical difficulties for a fullblown relationship). However, Tia specified their dalliance never went beyond kissing (So perhaps Colton isn’t lying about being a virgin?). Things took an uncomfortable turn when Becca asked her friend if she believed Colton was hoping Tia would be The Bachelorette, thus reuniting him with his former paramour. This was a fair question because, before Ari dumped Becca on national television, Tia was the frontrunner for The Bachelorette role. Tia’s response to Ms. Kurfin’s query was a Freudian slip: “Probably,” she said, before correcting herself and telling Becca it could possibly, maybe be the case that Colton wanted it to be her. Okay, we all know the truth. Why are we even pretending he wasn’t hoping for Tia at this point?

All that awkwardness didn’t do Colton any favours, and it was Chris who walked away with The Date Rose. His prize was a recording session with our leading lady and a middle-aged recording artist Becca pretended to recognize. She really is an awfully good sport! At this juncture, Chris took the opportunity to open up about his primal wound, his parents’ divorce. Becca seemed touched by his vulnerability, which was far superior to the toxic masculinity that ran through most of the show.

At the party afterwards, David (Chicken Suit) and Jordan (IRL Zoolander) continued to butt heads. If I wrote Bachelorette fan fiction, the true cause of all their tension would be an underlying sexual tension, namsayin’? Sadly, that’s probably not what’s going on here.

Anyway, Jordan boasted about his 100% match rate on Tinder. Um, given that he’s from Chrystal River Florida, is that really such a huge accomplishment? It’s a small town. How many single women actually live there? And of those people, how many are even on Tinder? Like, four? I mean, surely some Chrystal River residents must prefer OkCupid! Anyway, David was offended by Jordan’s comments and basically slutshamed him by reporting his high match rate straight to Becca. It was a pretty low blow, but Jordan was very Zen about it. With his classic wit, Jordan argued his match rate proves he’s basically irresistible, and will only make him more attractive to Becca. It wasn’t bad logic, and actually made me respect Jordan’s intellect for a moment. But he did also call his face his “professionality,” I’m not sure if he meant “professionalism,” or if the word is a portmanteau of “profession” and “personality.” Either way, I have no idea what the hell he was getting at. Ah, Jordan, you are a riddle wrapped in an enigma, doused in hair product.

Sadly, however, Jordan’s rival David became the victim of tragedy later in the episode. He fell out of his bunk bed, landing face first. There was blood and gore everywhere. An ambulance was sent to fetch him, and the poor gent ended up in intensive care. However, David bravely proclaimed his intention to the mansion as soon as possible when Becca called to give her regards. You would think such a jarring incident would inspire a detente between him and Jordan, but the male model took the opportunity to gloat about his nemesis’ accident, darkly declaring, “Apparently chickens can’t fly.” Jordan attributed his enemy’s accident to “karma.” Wow, he is so empathetic, you guys! He’s basically the Dalai Lama.

The next group date also involved an injury. During a football-themed challenge, Clay, was bringing his A-game when he broke his wrist. Now, given that his body is his livelihood, I have a lot of empathy for Clay’s situation. However, all the other dudes seemed exponentially more upset about the NFL player’s broken wrist than the fact that David was recuperating in intensive care. As soon as Clay became injured, the other guys stopped playing the game out of concern. Wow, Americans are hella serious about their football heroes! I don’t think I truly understood that before tonight.

Clay did return from the hospital in time for the after-party that evening. And, to celebrate his return, Becca bestowed The Date Rose on the bandaged young man. Clay readily accept, however, he later returned the floral memento. It turned out Clay required surgery immediately in order to preserve his playing abilities. And that presented him with the choice between staying for Becca, and supporting his family. He chose the later, which Becca understood because of his “big heart.” Clay left regretfully, lamenting that he could have fallen her if given the time. For her part, Becca was left in tears. Poor girl, it’s Episode 3 and she’s already starring in the most dramatic season of The Bachelorette ever. It’s like this series has morphed into The Walking Dead, but with more sparkly dresses.