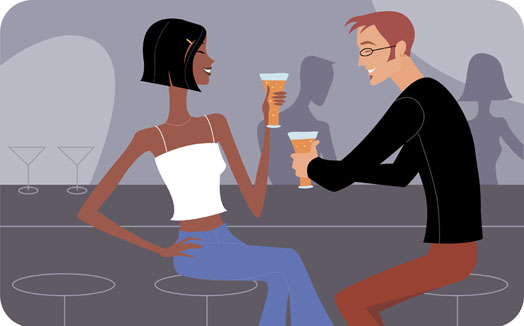 Between fending off romantic thoughts and plotting to be the next greatest writer since Hank Moody, I’ve made a modern-dating discovery. Eureka! How ironic that I uncovered such mystery at this hallowed Starbucks locale- notorious for convening a pretentious hub of writers. As an aside, it appears everyone here is penning a manuscript in between sipping fancy beverages, or perhaps it’s all just for show. Anyway, seeing as this is my inaugural post, should I not claim sole possession of a powerful modern-dating regimen to overhaul your current dating repertoire? When did Casanova die and hand down the mantle to me as the next women’s whisperer? Besides, where’s my credibility as a dating blogger? Why should my opinion matter? Why is water wet? Endless questions…

Here’s why: I discovered that dating is just a westernized and respectable word for “let us casually hook up for the next couple of months and- here’s the part no one likes to mention- break it off, only to chalk it up as an experience”. Understandably, no dating guides or coaches are frank enough to share this bit with you, but allow me to break the silence: The modern-dating world is fraught with men and women looking to celebrate their singledom without exclusivity. While many relationship hopefuls are lost in romantic pursuits of a happily-ever-after, the thriving modern-dater is much aware of the ephemeral dating scene and acts accordingly.

Thank you western world for coining such euphemism in dating- life would have been too crude otherwise. Wait, here comes a gorgeous twenty-something woman, eclipsed by another beautiful lady. So why am I not approaching any of them? I’ll share with you another modern-dating gem: It’s a numbers game and not as aggrandized as depicted in movies and harlequin novels. The real modern-dating arena is monotonous, exhausting and unforgivably heartbreaking, especially if you’re off-track. Now, imagine yourself in the driver’s seat and at the fork-road of dating or a relationship, then comes an abrupt knock. Knock Knock. Who’s there? Your Date Crew. Your Date Crew who? Your Date Crew coach, officially on duty to refine your dating skills en route to your dating success. Did I mention the race begins and ends with you at the helm of it all? Ladies and gentlemen, start your engines!