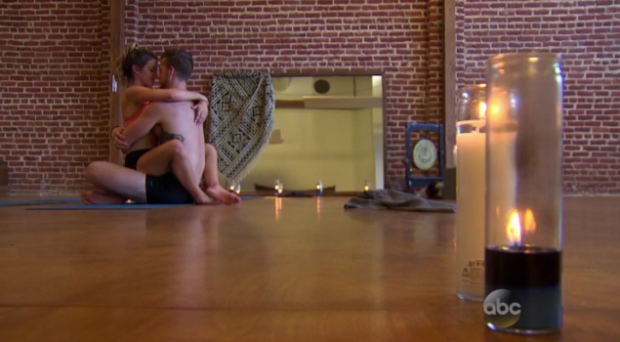 The Bachelorette: Bromances & Lessons from History

Okay, so let’s get one glaring fact out of the way. The bachelor’s are all smoking this season, but unfortunately, that makes it hard to tell them all apart. Where are the distinct teeth? The bad haircuts? The bad manscaping? Thank god for Wells, and at least we all know who Chad is by now. (If you don’t, just look for the guy either a) weight lifting b) eating or c) sulking).

But before we get more into that, the first date: Jojo went on a hot one-on-one with Chase. Apparently this is a season of literally high temperatures. Engaging in a session of hot yoga, the couple got up close and personal. Nothing brings two people together quite like twisting into weird pretzel shapes in a sweaty room. The word “anger-gasm” was also thrown around as the two thrashed around. May their potential children never unearth this foreplay-style first date footage. Naturally, the intimate setting later led to talk of Chase’s divorced parents, a kiss and the coveted thorny flower. Insert here the ABC staple of throwing in a random musician, Charles Kelley, who is likely now questioning his life choices.

Back at the house, restless bachelors united to hate on Chad. We don’t have to feel too bad for him though, because this villain is not a lone island. A forbidden bromance brewed up between Daniel and Chad over weightlifting. Awww. But when Chad found out that he was going on a group date, the sulk-fest began. Just in case we forgot about the Erectile Dysfunction Specialist, Evan had his moment to shine on the group date, which involved publicly telling sex stories. “Just another day in the office,” Evan claimed. I’m sure Jojo is thrilled at the idea of attending your office Christmas party, Evan. The specialist took his time onstage to jab at Chad, the perfect setup for Chad later punching a door because…Chad. It could have something to do with the fact that Chad’s stage game went off track when he called up Jojo and was rejected for a kiss. Regardless, our villain ended up with bloody knuckles. (On the off chance we’ll need to start keeping score this season, it’s currently Inanimate Object: 1, Chad: 0). We also missed a prime opportunity to learn Chad’s sexual history with some lame excuse along the lines of, “the past is the past.”

On Jojo’s forgettable date with James Taylor, the two got to dancing. It could have been considered hot, if one date earlier Jojo hadn’t gotten all horizontal and twisted up with Chase. She made sure to note that James has now at least left the dreaded Friend Zone. But despite a lack of instantaneous chemistry, this zone drifter still got his rose. It’s still early in the game, and who knows, maybe James IS here to make friends and just doesn’t know it. However, the friendship spotlight ultimately shone on Daniel this episode, who stumbled into giving Chad advice of epically historical proportions. While Chad’s glare promised his lone ally’s death (likely by food deprivation), Daniel hopped from comparing Chad to Hitler to Mussolini. The overall point here might have been that  Chad, like fascists, could use some toning down.

Evan ended up throwing down an ultimatum to Jojo. Either Chad leaves, or Evan does. The angry contestant lost all resolve as soon as Jojo distracted him with a pretty rose of his very own. But Evan isn’t one to let go. He reverted back to preschool antics by tattling on Chad to Chris, claiming that everyone felt “unsafe.” Pretty sure the only true victim so far has been an innocent door. All right, and let’s not forget the poor shirt Chad nearly ripped from Evan’s body in a much built-up, 5 second “altercation.” (Inanimate Object: 1, Chad: 1). Evan’s tattling was pretty much the Bachelor equivalent of running to a teacher, but it paid off when Chris advised Chad to smooth things over with the guys.Ummmm…you’re not even going to take away his ‘recesss’ privileges, like playing on the weight lift bars? The episode ends with our villain storming off to confront his Bachelor demons…

Tuesday night again honed in on Chad, making me wonder if we should just rename this whole thing The Chadelor. The contestants had a pool party, apparently for no other reason than Jojo getting into a bikini. When Jordan and Jojo were alone, we saw the romantic drama we’ve all been waiting for- Jojo worried that it’s “too good to be true” with Jordan. Okay, so not that dramatic, but previews suggest there could be storm clouds on the horizon for this couple. Evan took the pool time to give himself a bloody nose, again giving Inanimate Objects the lead in injuries inflicted over humans. Later, Derek took up Evan’s (noble?) cause and tried to warn Jojo about Chad. Unfortunately, the villain overheard, and Chad rocketed up the tension by receiving the night’s final rose.

When the show shifted to Pennsylvania, Luke got the first one on one date. Last season’s tradition of hot tubs in places they just don’t belong continued when Luke and Jojo stopped a dog sledding date in the middle of the wilderness for a hot tub detour. I’m not complaining though, because Luke had to chop wood himself to heat things up. The man also managed to look adorable as he helped a cringing Jojo into the tub and told her about his time in Afghanistan. Later, we were once again treated to an unasked for concert, where the couple kissed in front of a cheering audience. You know, just keeping things low key.
On the group date, bloodshed continued. During a football game, Evan got another nosebleed, and James Taylor wound up with a head injury. To no one’s surprise, the Ex-Professional Football Player Jordan was in his element. Up until the winning team’s evening date, it seemed Robby was a forgettable write-off. But by the time he was making out with Jojo and confessing his feelings, it was clear he’s been a ghost contender all along. Still, Jordan got the night’s rose. The next two-on-one with Alex and Chad competing was oddly less exciting than the buildup. In a nutshell, Chad casually threatened to stalk Jordan after the show, and warned that he isn’t safe. #mood. Clearly someone forgot to feed this guy. On the date, Alex’s confession to Jojo of what happened led to a confrontation scene. Chad responded to Jojo’s investigative questions by stating that they may not be “100% untrue.” Jojo had to pretend to mull this over, but ultimately walked away hand in hand with Alex at episode’s end. We may think it’s over, but Chad is creepily whistling alone in the woods, and previews suggest the real Hunger Games could just be getting started….